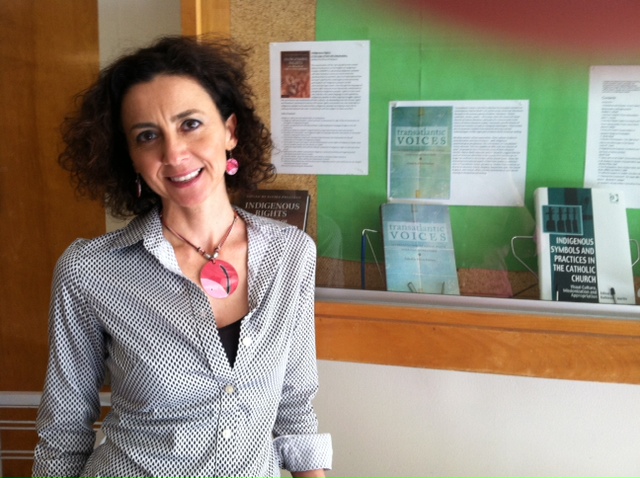 Dr. Pulitano’s research and teaching interests include Indigenous and Africana Studies, Caribbean Studies, theories of race and ethnicity, migration, diaspora, and human rights discourse. She joined the ethnic studies department at Cal Poly in fall 2006. A Fulbright scholar from Italy, Dr. Pulitano holds a Ph.D. in English from the University of New Mexico where she specialized in Native American literature and postcolonial studies. Prior to her appointment at Cal Poly, she taught postcolonial literatures and theory at the Universities of Geneva and Lausanne, in Switzerland.

Dr. Pulitano is currently completing a monograph focusing on ARTtivist practices as counter-discourse to “irregular” migration and border crossings in Europe. Previous publications include Transnational Narratives from the Caribbean: Diasporic Literature and the Human Experience (Routledge 2016), Indigenous Rights in the Age of the UN Declaration (Cambridge UP 2012), Transatlantic Voices: Interpretations of Native North American Literatures (The University of Nebraska Press, 2007), and Toward a Native American Critical Theory (The University of Nebraska Press, 2003).

Dr. Pulitano is also a strong advocate for international education and has taught in the Cal Poly Global Programs in Spain and Perú. She recently developed Cal Poly's new study abroad program, “Language and Culture in Sicily,” a four-week program based in Palermo, Sicily, which she hopes to offer on-site in the near future.

Pulitano, Elvira. “The Right to Enjoy all Human Rights”: The UN Declaration on the Rights of Indigenous Peoples and the Potential for Decolonial Cosmopolitanism.” The World, the Text, and the Indian: Global Dimensions of Native American Literature. Ed. Scott Richard Lyons. New York: SUNY Press, 2017.

Pulitano, Elvira. “In Liberty’s Shadow: The Discourse of Refugees in Critical Race Theory and Immigration Law/Politics.” Identities: Global Studies in Culture and Power. 20.2 (2013): 172-189.

Pulitano, Elvira. “Kānāwai, International Law, and the Discourse of Indigenous Justice: Some Reflections on The Peoples’ International Tribunal in Hawaii.” Indigenous Rights in the Age of the UN Declaration. Ed. Elvira Pulitano. Cambridge: Cambridge University Press, 2012.